In this article, I wanted to do something fun for Halloween. When I originally posted this, I was trying to post a Halloween hair or makeup style, every single day of October until Halloween. This was the first look I did: undead Halloween makeup and I love this look. 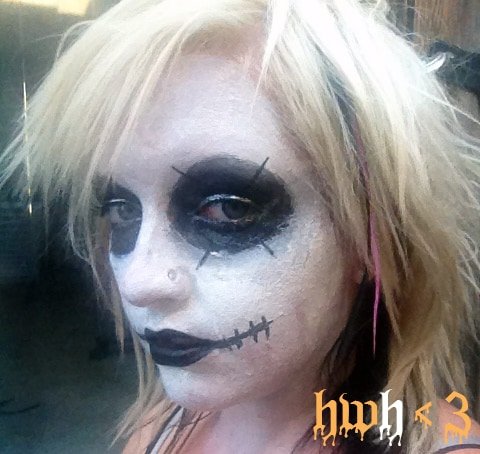 First off, I am well aware that my shoulders don’t match my face. I work at a tanning salon so what can you expect? If I planned to wear this makeup out, I would either have painted or covered my skin. For the sake of the article, I tried to crop it out of the picture.

To create this look you will need:

To be completely honest, I did not have the white costume makeup for my face. Instead, I improvised and used was diaper rash ointment. I have no idea why I have it at my house, but I do have it so I used it. The downfall to using diaper rash is that I had to wash my face about 7 times to get if off, and plus it never dries. Another clever idea to use is a white facial masque, and I know that most of you probably have that lying around. 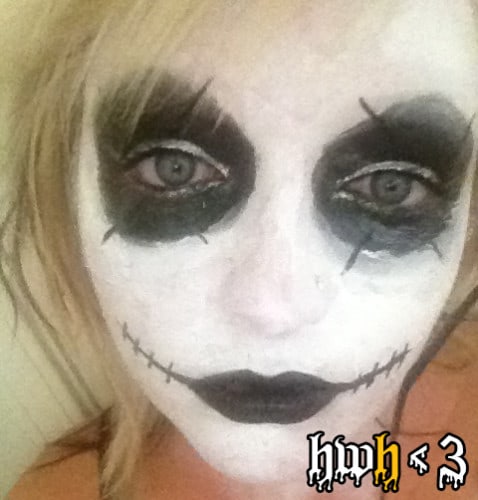 For my lips and around my eyes, I used black costume paint that I picked up at the Halloween store (yes, I know- I should have purchased white too). I tried to make my lips as defined as possible and even used a Q-tip to outline the edges. The black around your eyes does not need to be perfect in this case. It should be rugged and joker-esque. It is supposed to look like you have sunken in eyes.

After the black make up dried, I used my silver glitter eyeliner to apply eyeliner like I normally wear it. I also applied mascara because, hey, everything is better with mascara.

To finish off this look, I drew the stitches on the sides of my mouth, and the X’s on my eyes with black eyeliner.

As for my hair, that is pretty much how my hair looks when I wake up everyday. To my advantage, I was running late this morning and had to just throw my hair up in a messy ponytail. After I did my makeup, I took my hair down and messed it up even more. Obviously undead people don’t have perfect hair, so the messier, the better. 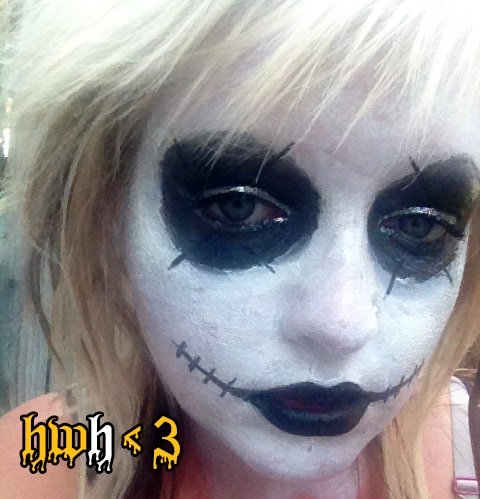 What do you think of this undead Halloween makeup? Would you ever give it a shot? I’d love to read your feedback in the comments section below.