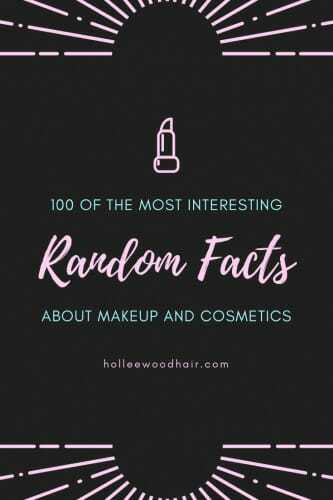 What better way to pass the time than with 50 fun facts about makeup and cosmetics!?

****I’m currently in the process of updating this post so I can republish it with current information. If it looks weird, or you notice that things are out of place… that’s why. Please check back again in a few days to see the updated post 🙂

1. Makeup is regulated by the FDA along with food, over-the-counter drugs, and medical devices. They could stop the sale of any cosmetic product if they see it unsafe.

2. The word “cosmetic” comes from the Greek word kosmos, which means “of this world or worldly.”

3. Because you wash your hands more than your face, it is not good to match makeup to the skin tone on your hands. This could make you chose a darker or redder tone.

4. Women used to pinch their cheeks to give themselves rosy cheeks before the invention of blush.

5. Ground-up fish scales can be used to add shimmer to lipstick and eyeshadow.

6. Bubble bath, mouthwash, and deodorant are all considered cosmetics.

7. The world’s first EVER cosmetics were created from copper and lead ore by ancient Egyptians.

8. The first makeup came from Egypt, where women painted their eyes by applying dark color under the eyelid and blackening their eyelashes.

9. In the old days, makeup was used to frighten enemies, show a social rank or make magic.

10. The founder of Maybelline named the company after his sister Maybel who inspired him to create makeup products.

11. “Hypoallergenic” means that the manufacturer feels the product is less likely to cause an allergic reaction.

12. When the term “natural ingredients” is used, it means they are extracted directly from plants or animal products.

16. Keeping makeup out of sunlight prevents destroying the preservatives in it.

17. The ancient Romans considered wrinkles, freckles, sunspots, skin flakes and blemishes to be unfavorable. To soften wrinkles, they used swan fat or donkey milk; sores and freckles were treated with the ashes of snails.

18. Egyptians used henna to stain their nails before nail polish was invented.

19. The first nail polish was invented in China in 3000 B.C. by mixing egg whites, beeswax, gum, and colored powder.

20. In 3000 B.C. pale was desirable. People had to “bleed themselves” by using leaches or cutting into a vein to achieve this look.

21. In 1400, it was fashionable for women to be hairless. They would shave their heads and pluck their eyebrows and eyelashes entirely out.

22. The most common injury caused by makeup is scratching the eye with a mascara wand.

23. In ancient Egypt, the beauty regime was very complicated. It began with a walk and applying incense pellets to their underarms as a form of deodorant. Then, while sitting at a mirror, servants brought grinders and applets used for daily makeup. The servants mixed malachite with oil derived from animal fat to create eyeshadow. The servant applied the eyeshadow with a small ivory stick carved on one end and then lined the eyes with black kohl. Red ochre was used as lipstick.

24. Acne is the most common skin problem in teenagers.

25. Except for color additives and a few prohibited ingredients, a cosmetic manufacturer may use almost any raw material as a cosmetic ingredient and market the product without an approval from FDA.

26. In the Elizabethan era, coal tar was used as eyeliner, mascara, and eyebrow pencil. Unfortunately, it smelled terrible, caused blindness and is flammable.

27. In the Victorian era, upper-class women did not wear any makeup, since it was only used by stage actresses, working-class women, and prostitutes.

28. Nightingale feces is used in geisha facials. It is applied wet and allowed to dry. It’s supposed to diminish wrinkles and said to be a great exfoliator. (Read more about feces being used in makeup!)

29. Underarm hair was first said to be unfeminine by the Wilkenson Sword razor company in 1915 after a woman appeared on the cover of Harper’s Bazaar magazine without any.

30. Coco Chanel started the trend to be tan after she tanned herself on a cruise.

31. Mum crème deodorant was developed in Philadelphia in 1889. The main ingredient was aluminum chlorhydrate.

34. A popular technique called “urine therapy” is used by many celebrities to stay healthy and beautiful. This includes rubbing your first urine of the day on your face, and/or drinking a few drops :-/

35. In the 1400′s, women whitened their faces with “ceruse,” which was made from vinegar and powdered lead. Ceruse rapidly ate the skin away, causing the need to apply more than one layer. It eventually killed the person.

36. After a while, the lead in ceruse was replaced with zinc oxide.

37. Drinking an abundance of water adds an instant glow to your face.

38. Natives of New Zealand tattoo their faces with swirls called “Moko.”  This beauty ritual is considered sacred and dates back hundreds of years.

39. The United States has the highest rate of cosmetic surgery in the world.

41. Cochineal is a red dye made of ground up beetles and was used in ancient Incan and Aztec civilizations to color lips and nails red.

42. In the 1930′s, a product called “Lash Lure” was sold in the U.S. as permanent mascara. It blinded more than a dozen women and killed one.

43. In the 17th and 18th century, women dilated their eyes with drops from a plant called Belladonna, as it was considered attractive. Long-term use damaged the eyes and led to blindness.

44. Acne and burn patients in the U.K. may be treated with “Vavelta,” a clear liquid that contains skin cells that rejuvenate and revitalize damaged skin from the inside out. These skin cells, called fibroblasts, are isolated from foreskins donated by mothers of circumcised baby boys.

45. In ancient Rome, “cosmetae” (where the word cosmetologist came from) were female servants who applied cosmetics to wealthy Roman women and bathed them in perfume. It is also said that cosmetae dissolved various cosmetic ingredients in their own saliva.

46. Dying your hair black in ancient Rome involved feeding leeches, putting them in vinegar, leaving the substance to ferment for two months and thicken into a paste, then applying the mixture to the hair and allowing it to dry for a day.

47. When waterproof mascara entered the beauty industry in 1938, it was made of 50% turpentine.

48. Cleopatra was known to soak her ship’s sails in perfume so the fragrance would reach Rome (and Marc Antony) before she did.

49. In Vietnam and other parts of Asia, women and men take part in the ritual of “teeth blackening” to enhance sex appeal, maintain healthy teeth, and not be mistaken for an evil spirit.

Check out these 6 legitimate ways to get free high-end makeup!

Do you have any more fun facts about makeup and cosmetics that weren’t mentioned? I’d love to read your feedback in the comments section below…

There are so many amazing facts out there i was searching few but atlast got many on this website , Thank you so much :)

how high is the working rate in the United States ?

I had to get my 20 facts about whatever done very quickly and this website helped a lot. Than You!

This blos pretty interesting and I like your post but your 1st fact and 25th fact contradict each other and your 12th fact is untrue, marketing laws mean that manufactuers can label a product as natural even if only one ingredient is 'natural'. Just thought I would point that out as this sayd 'facts'

these facts are great and interesting to read