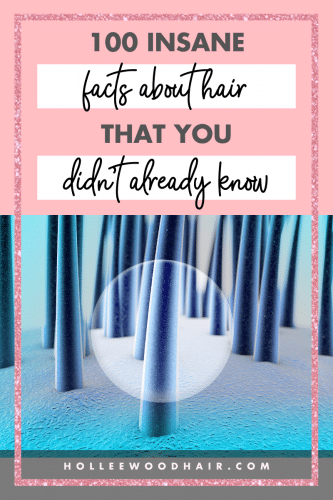 Are you ready to get down with some super interesting fun facts about hair?

…because don’t you want to be the life of the party or that person at the water cooler that everyone wants to talk to? The one that knows a bunch of cool information?

Plus, you know that there’s nothing better than a massive list of cool things you didn’t know, right?

So grab a cup of coffee, pull up a chair, and enjoy these super cool fun facts about hair!

💡TIP: Pin this article to your Hair board on Pinterest so you can always come back to it when you need to!

2. Natural blondes have more hair than all other colors! Towheads top the charts with 150,000 strands; brunettes have 100,000 strands, and redheads average about 90,000 strands.

3. Hair is the fastest growing tissue in the body. The only thing that grows faster is bone marrow.

9. 35 meters of hair fiber is produced every day on the average adult human’s scalp.

10. The average human will grow 590 miles worth of hair during their lifetime.

12. 40% of women have female pattern hair loss by the time they go through menopause.

14. For it to be apparent that you’re balding, you would have to lose 50% of your hair.

15. Many medications cause hair loss as a side effect.

17. Baby humans are born with about five million hair follicles, and there is no possible way to increase the number of follicles you have.

18. This is roughly 1000 active hair follicles per square centimeter, and this number drops as you age.

19. All of these hair follicles were formed when we were five months in the womb.

20. Hair turns grey due to lower pigment production in the hair follicle as a result of age or stress.

22. A single strand of hair can support up to 3 ounces of weight.

23. A whole head of hair can support up to 12 tons… the weight of two grown elephants.

25. The length of the growing phase of hair shortens as you age.

26. Each follicle grows a completely new hair about 20 times in a lifetime.

28. Each hair strand has a protective outer layer called the cuticle, made of scales that protect the inner layers. The cuticle lays flat with healthy hair but is more open with damaged hair.

29. The cortex is the middle layer of a hair strand and is composed of long proteins twisted together. Melanin lives in this layer.

30. The innermost layer of hair is called the medulla, and it has no purpose. This layer is usually not present in fine hair.

31. Keratin is mostly composed of an amino acid called cysteine, which is what gives the hair its shape.

32. Blow-drying your hair works by altering the shape of hydrogen bonds in your hair. Water also changes hydrogen bonds, which is why straight hair won’t last in humid conditions.

33. The only part of the hair that isn’t dead is the hair inside your scalp.

35. Asian hair grows the fastest and has the best elasticity.

36. Africans and Europeans are more prone to balding than Asians.

38. The primary cause of dandruff is a fungus called Malassezia Globosa, which pushes dead skin cells to the surface quicker than average.

39. The word shampoo comes from the Hindi word, champna, which means “to knead.”

40. Women often lose more hair after giving birth. This is due to their hormones regulating back to normal.

41. Most shampoos are slightly acidic to restore the pH of damaged hair and smooth the cuticle.

43. The only way to get rid of split ends is to cut them off. There is no way to repair them completely.

44. The tensile strength of your hair is close to that of steel. It only breaks after being stretched to 1.5 times its original length.

45. Wet hair is even stronger and can stretch up to 70% of its original length.

46. A sixteenth-century doctor claimed you could restore hair by applying boiled slugs, olive oil, honey, saffron, soap, and cumin to the scalp.

48. Trichotillomania is the name of a compulsive hair-pulling disorder (that typically involves hair, eyelashes, and/or eyebrows). It’s more common in women and usually stress-related.

49. Different textures of hair have different cross-section shapes under a microscope. Straight hair is usually round, and curly hair is typically oval.

50. The first commercial shampoo was introduced by Drene in the 1930s. Before that, soap-type detergents were used.

51. 95% of right-handed people grow cowlicks in a clockwise direction.

52. Hair is stronger than a copper wire of the same diameter.

53. The size of a hair follicle determines the thickness and length of hair.

54. Each hair follicle contains its own muscle, nerve, and blood supply.

55. Hair grows the fastest during the summer, when you’re asleep, and between the ages of 16 to 24.

57. The werewolf legend is believed to have originated from an abnormality called hypertrichosis, which causes excess body hair or facial hair to grow in places it is not supposed to.

58. The growing stage of hair lasts between 2-7 years on average.

59. Scientists can tell what you eat, drink, or the environment you live in, by examining a small piece of your hair.

61. Every inch of the human body is covered in hair besides the palms, soles of the feet, and lips.

64. The average man spends 37 days of his life shaving.

65. Facial hair grows faster than any other type of body hair.

66. The scientific term for grey hair is canities.

67. The first hair dye was invented in 1907 by French chemist Eugene Schueller, and it was called Aureole.

68. If a man never shaved his beard, it would grow to over 30 feet in a lifetime.

69. Many store-bought hair colors contain metallic salts that accumulate on the hair shaft. They can cause breakage or severe discoloration if later colored or permed by a professional hairstylist.

70. The first men’s hair product was called Brylcreem, was produced in 1928, and was made of mineral oil, beeswax, and water.

71. On average, women’s hair is half the diameter of men’s hair.

72. The process of removing unwanted body hair dates back to the ancient Egyptians.

73. In Russia, there was once a tax for wearing a beard.

74. Humans have the same amount of hair follicles per square inch as a chimpanzee.

75. The scientific term for split ends is trichoptilosis.

77. Body hair is generally shorter because the growing phase is a lot shorter than that of hair on the scalp.

78. The earliest form of chemical hair removal dates back to the ancient Turks, who used a concoction known as rusma. Rusma is a combination of yellow sulfide of arsenic, quicklime, and rose-water.

79. The growing stage of hair is called anagen, and the resting phase is called catagen. When hair goes into the telogen phase, it will shed.

80. Human hair appears to grow after death due to dehydration and the shrinking of the skin.

81. Scientists have discovered that people with a higher IQ have more zinc and copper in their hair.

83. The purpose of hair is to regulate body temperature since our head lacks the thermal insulation fat layers.

84. Every hair follicle is entirely independent of neighboring strands.

85. Less than 2% of the world’s population has naturally red hair.

86. Hair becomes drier with age as a result of shrinking oil glands.

87. Hair transplantation is the only permanent solution for hair loss.

88. Gender and age cannot identify by a strand of hair.

89. Most hair extensions come from people of Chinese and Indian heritage.

90. As soon as a hair is plucked from the follicle, a new one begins to grow.

91. Goosebumps can be caused by cold or fear. They’re a result of the hair follicles contracting, causing the hair and surrounding skin to bunch up.

94. The average American woman spends between 10-23 thousand dollars in her lifetime on unwanted hair removal.

96. Cutting your hair does not influence how fast or slow it grows… a myth that many people believe.

97. Studies show that hairy chested men are less likely to get liver cirrhosis than men with less hair.

98. In ancient Rome, women dyed their hair with pigeon droppings.

99. Alopecia is the medical term for hair loss.

100. In 2004, the longest hair ever documented was measured. It belonged to Xie Qiuping from China and measured 18.5 feet long.

Now that you’re full of fun hair facts, you’re ready to impress everyone you know. Drop some of these bad boys at the next bbq or office party, and you’re guaranteed to earn some respect.

Your Turn: Do you know any other cool facts about hair? Are any of these hair facts debatable? Drop your thoughts in the comments section below! 👇🏼👇🏼👇🏼

In your myth busting „article“ I quote you said „You’ll hear people say things like, “I earned every single one of these grey hairs from my kids,” or “the president’s hair is a lot greyer now than it was when he got in office,” but these are just hair myths.

Grey hair is determined by genetics, and most people will go grey as they get older. In other words, he would have gone grey, whether he was in office or not.

Stress can definitely mess with your body, and it may shorten the life cycle of the hair strands. But it does not directly turn the hair grey.“ and then in faCt #20 you said i quote „ Hair turns grey due to lower pigment production in the hair follicle as a result of age or stress.“ thiS is very confusing so please verify which is right! ————-

I just noticed this mention randomly and wanted to reach out and say thank you. Much appreciated, Hollee.

This is something I have to pin, thanks for sharing...

Hair fact #80 - is actually incorrect. hair and nails do not continue growing after death. they often appear longer after a person dies, but this is because the skin around them retracts.

The process of hair growth is very complex. I ave had troubles along the way with hair growth and reading your post has taught me a few things that I didn't know